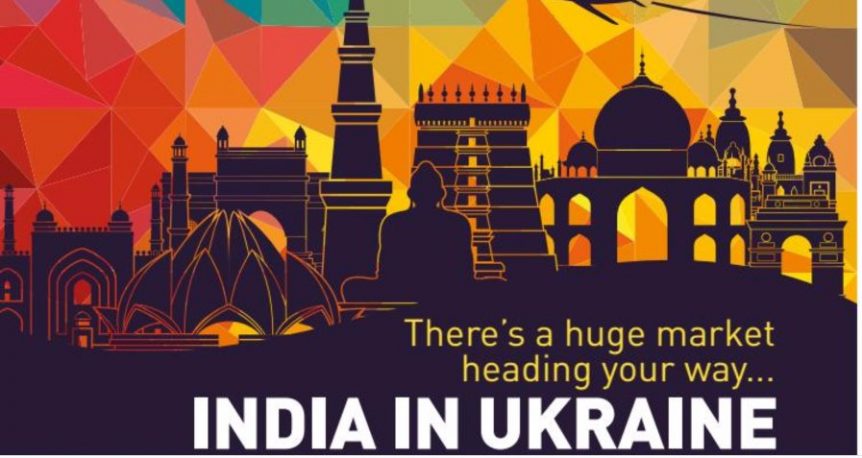 Which country is famous for Bollywood movies, dazzling dances and colorful Holi festivals, invented yoga, chess, geometry and algebra and is the second most populous state in the world? Where can you find an extremely rich culture, traditions in which all religions are recognized and peacefully co-exist, and at the same time one of the fastest-growing economies on the planet? India, of course. Today this country has the eyes of the whole world on it. Here in Ukraine, we’re fascinated by India too!

So why this fast-growing relationship? Well, for a start, Ukraine and India have a great deal in common. Both are peace- and freedom-loving nations that fought for independence for a very long time. In 2017, India and Ukraine mark their 25th anniversary of diplomatic relations and the 70th anniversary of India’s independence. Today our two countries cooperate successfully throughout economic, political, scientific and technical, defence and cultural areas, and enjoy warm and friendly relations.There is a good number of  Indian companies represented in Ukraine. In 2016, exports to India rose by 132 percent and imports by 110 percent when compared with 2015. This has resulted in a positive trade balance of 1417 million USD.The most prominent areas of partnership between Ukraine and India are:

Today, regional offices for around 15 Indian medical companies, such as Sun Pharma, Dr. Reddy’s Laboratories and Ranbaxy have been set up in Ukraine, together establishing the Indian Pharmaceutical Manufacturers Association in our country (IPMA).This organisation helps representatives of Indian pharmaceutical manufacturers with their activity in Ukraine, creating an accurate insight as to the international quality, achievements and potential of the Indian pharmaceutical industry.

There’s significant potential for cooperation between Ukraine and India within the agricultural sector, with opportunities for expanding this huge market and providing tremendous prospects for trade. India’s population is growing by around 15 million per year. If we can capture just 1 percent of the total Indian market, our target audience will be 13.4 million people!

Ukraine’s fertile land and mild climate have genuine potential to help India solve its serious hunger problem. As a country where 40-80 percent of people are vegetarian, India is extremely interested in our bean cultures and grain crops, and it’s a major buyer of Ukrainian sunflower oil. By 2016, India had become the largest buyer of Ukrainian wheat in the world, importing approximately 1.5 million tons.This is closely related to the reduction of import duties on wheat from 25 percent to 10 percent, at the beginning of the crop harvesting season.

For many years now, India has imported a considerable amount of base metals, including ferrous metals, composing about 49 percent of total Ukrainian metal exports. As for machinery, special attention should be paid to military-technical cooperation and partnership in aircraft engineering between our countries.

Ukraine signed 15 memorandums during one of the world’s largest international expos of land and naval weapons, DefExpo, which took place in South Goa in 2016. Among these were memoranda on the joint development of multipurpose military transport aircraft, AN, fulfilling the needs of the Indian Air Force, and for civilian purposes, an agreement on long-term cooperation to supply gas turbines, made by Zorya-Mashproekt in Mykolaiv, and on their further installation as part of Indian naval forces equipment.

Industrial cooperation projects are happening in the fields of aeronautics, the production of radar and maritime surveillance equipment, the modernization of armored vehicles, air defense systems, aircraft, and the development of homing heads. Joint development of air-to-air missiles has significant potential and is generating great interest from our Indian partners.

At present, cooperation between the two countries for Indian specialists studying at Ukrainian universities is one of the key directions for bilateral relations. Ten percent of all international students in Ukraine are from India.

Between 2000 and 2010 the number of Indian students enrolled in universities outside their own country rose from 2 million to 3.6 million. Ukraine, with its high quality education system introduced in accordance with the Bologna process, its attractive location in Eastern Europe, and cheaper course fees, at around 2.5 thousand USD per year, is an attractive choice for Indian students.

Still, cooperation in this area could be much more effective. Since around 40 percent of the Indian population is below 35 and another million people turn 18 every month, India could open up a huge market for Ukrainian universities.

Currently, Ukraine-India cultural exchange is on the rise. This is strongly supported by the Indian Embassy in Ukraine, which regularly organizes opulent celebrations of Indian holidays and festivals such as Diwali, the breathtaking Hindu festival of lights, and actively promotes Indian culture and values among Ukrainians. The Indian Ambassador, H.E. Manoj K. Bharti, often delivers lectures to Ukrainian students about his homeland: its diverse culture, rich history and future prospects for collaboration with Ukraine. And what’s more, there’s even an India Club, founded by a few Indian expats in 2001 and intended to encourage cultural and social interaction among its members and all Ukrainians with an enthusiasm for Indian culture and heritage.

More and more people in Ukraine dream of visiting India in the hope of finding inspiration and a path to enlightened living. In Ukraine there are now more than 10 schools of Indian dance and a growing number of prestigious Indian restaurants, including such famous places as Himalaya, Sutra, and New Bombay Palace.

Doubtless, collaboration in terms of tourism plays an important role for both countries. However, at a time when more than 20 million foreigners come to visit Ukraine every year, the share of Indian tourists among them remains quite small. The main reasons for this are the lack of an effective Ukrainian promotional campaign, the absence of direct transport connections between the two countries, and visa issues. In order to strengthen bilateral ties, Ukraine has recently simplified the visa procedure for Indian travelers. So from April 17, 2017, Indian businessmen and tourists can obtain a Visa on Arrival (VoA) for trips lasting up to 15 days. We anticipate that many more tourists from India will visit Ukraine in the future.

Despite excellent potential, the current level of collaboration between countries doesn’t correspond to the amazing opportunities open to us. Both sides want to increase international cooperation and agree that it should be expanded. India offers us a huge market. The question is: are we ready to make the most of this huge potential for future India-Ukraine collaboration?