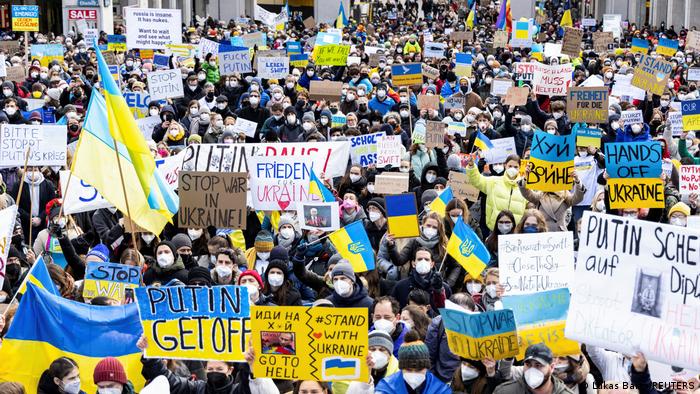 Early morning of the 24th of February 2022 brought a shock to the people of Ukraine; we woke up to a massive ballistic missile strike on Kyiv and other cities in Ukraine. At 4 a.m. Kyiv time, the president of the Russian Federation Vladimir Putin made a statement about the launch of a so-called “military operation in Ukraine”, which is nothing less than an aggressive war against Ukraine, its people and sovereignty.

However, the war started not on 24th of February 2022 but back in 2014 with the Crimea operation and the subsequent outbreak of war in the Donetsk and Luhansk regions, whose active phase lasted for 2 years (2014-2015) before the “Minsk agreements” ceasefire.

A ceasefire was not always effective as Russia continued to escalate the situation in Ukraine during these past few years, which ultimately led to the so-called “recognition of DPR and LPR” on the administrative borders of the Donetsk region and the Luhansk region on February 21, 2022.

For eight years, Russia has tried to justify its actions by saying that “Nazis” who are subordinate to the “collective West” have seized power in Ukraine. Having failed to produce the desired effect, dreaming of “restoring the USSR,” whose collapse he repeatedly called the “greatest geopolitical tragedy of the 20th century,” on 24th of February 2022 Vladimir Putin decided to unleash a full-scale war to take over all of Ukraine.

Vladimir Putin outlined the following goals of the “military operation”:

“The fascists of the future will be called anti-fascists”

Regardless of who in fact said this, Winston Churchill, Huey Long or Ignazio Silone, Ukrainians may attest that it is one hundred percent true. Under the guise of “denazification”, Russia is bombing civilian cities, destroying hospitals and maternities, churches, schools and universities, other residential buildings, killing civilians, and using weapons prohibited by the Geneva Convention; people are forced to hide in basements, subways, bomb shelters. Horrific footage of the bombings of Kharkiv, Bucha, Gostomel, Irpin, Kyiv, Chernihiv and hundreds of other towns and villages shall leave no one indifferent.

In just twelve days of warfare, the Russian army has damaged or completely destroyed more than 202 schools, 34 hospitals, and more than 1,500 residential houses (including multistory buildings). More than 900 Ukrainian cities and towns are left without any electricity, water and heating.

As of the writing of this blogpost, more than 2,000 civilians, including children, have already died and thousands more have been wounded in this war, which Ukraine did not unleash. Some may say that this is war, and in war civilians always suffer. But let’s be honest, a war in the 21st century on the European continent under the guise of “denazification” is a crime against all humanity and its “bright future”.

On the 24th of February 2022 the Russian occupiers began shooting in the Chernobyl Zone and on the 3rd of March 2022 Russian troops fired on Zaporizhia Nuclear Power Plant, an act which carries the potential to unleash global nuclear disaster.

How cynical it is to declare their aim of “denazification” and then bomb the Babyn Yar Holocaust Memorial and make children orphans from the first day of their life or force the Ukrainian people to become homeless refugees. The situation is becoming more and more reminiscent of another tragic moment in Ukrainian history – the “Holodomor“, when the criminal leadership of the USSR, trying to break the resistance and the will of the people, starved the Ukrainians to death. The Holodomor resulted in the death of 10 million innocent people, which was further recognized as a genocide of the Ukrainian people.

Ukraine has a dream to be counted among the members of the European Union, and it is for this dream that Russia wishes to punish Ukraine. Who will be next? Moldova? Finland? Sweden? Belarussian President Alexander Lukashenko appeared to broadcast a planned Russian invasion of Moldova during an address to his security council on March 1, 2022.

We all stand for our country and the Armed Forces of Ukraine and believe in victory and long-awaited peace!

The position of the Russian Federation remains unchanged – a complete takeover of Ukraine and the establishment of its puppet government led by ex-President of Ukraine Viktor Yanukovych who was ousted in 2014.

At the same time Ukraine has made 2 attempts to negotiate peace with the Russian Federation, while Ukrainian Armed forces continue to “demilitarize” the Russian army. The negotiations seem to have not had the desired effect of reaching a peaceful settlement. There is legitimate concern that even if the Russian Federation agrees to end the conflict, it may continue to try to take over control over Ukraine in future. In the First Chechen War a peace treaty was signed between Chechnya and Russia, however Russia made another attempt to take control over Chechnya in the Second Chechen War and succeeded. It seems that the agreements signed by Russia are not worth the price of the sheet of paper they are written on and Russia shall never give up its intent to rebuild the so-called Evil Empire USSR. It is time for the global community to confront the bloodthirsty appetites of Russia.

The USA, Japan, Canada, New Zealand, Switzerland, the United Kingdom and most of the EU countries have implemented sanctions against Russia and its officials as well as provide financial, military and humanitarian support to Ukraine.

Global businesses are also showing their support for Ukraine and are gradually ceasing business operations involving Russia in order both to avoid financing the Russian invasion and to show solidarity with Ukraine. The reality is that for the past twelve days it has become shameful to be Russian and deal with Russian people or businesses.

Starting from March 7, 2022, the United Nations International Court of Justice in The Hague will be considering an injunction that Ukraine has sought against Russia under the UN Convention against Genocide.

Ukraine’s President Volodymyr Zelenskyy declared martial law across the entire country on the 24st of February 2022 in response to the Russian invasion of Ukraine. The legal regime of martial law in Ukraine is regulated by the Law of Ukraine On Legal Regime of Martial Law 389-VIII dated 12.05.2015 and provides for:

Please note, at present, we do not recommend visiting Ukraine for tourism or business purposes.

National Bank of Ukraine (NBU) has imposed certain restrictions on financial operations during the period of Martial law in Ukraine:

International Legion for the Territorial Defense of Ukraine

Currently more than 16,000 people from overseas have volunteered to fight in Ukraine and this number continues to grow.

If you want to join the International Legion for the Territorial Defense of Ukraine and help Ukraine in its struggle against Russia you must meet the following requirements:

If you satisfy the above criteria you must:

More information can be found here.

How can you help Ukraine and the Ukrainian Armed Forces?

Everyone who supports Ukraine and the Ukrainian people and wants to help us at this difficult time financially, may follow the links below to various aid accounts for both the Armed Forces of Ukraine and Humanitarian aid.

Support the Armed Forces of Ukraine

humanitarian assistance to the people of Ukraine

Information on where you can send humanitarian help

We wish you all a peaceful sky!