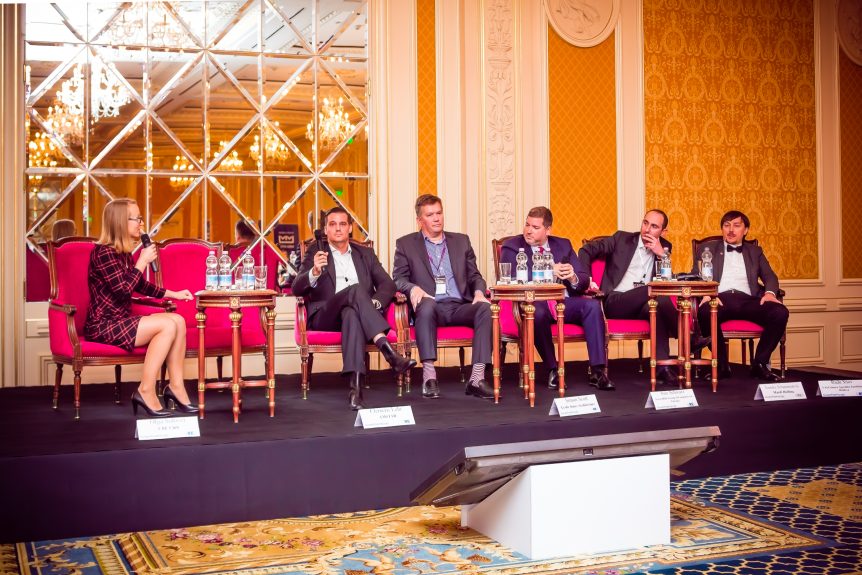 “The market will go up, so we want to be here.” These optimistic words from Arie Schwarz, CEO of Seven Hills Group of Companies in Ukraine, were the key takeaway of the 2nd Eastern Europe and Asia Forum, a recent conference on tourism and real estate in Ukraine and its surrounding region.

The forum took place on November 24, 2016, organized by the EuropaProperty.com and URE Club. The event was attended by more than 250 participants and was hosted by the five-star Fairmont Hotel in the heart of Kiev.

Regional experts, developers, bankers and investors doing business in Ukraine, Georgia, Azerbaijan, Belarus, Kazakhstan and Moldova attended the event. Participants discussed their countries’ investment opportunities and challenges, tourism and its influence on investment attractiveness of the country, and the commercial and residential real-estate sectors.

During the first panel, all the speakers agreed that among key challenges for the Commonwealth of Independent States (CIS) countries are improving their image in the eyes of foreign investors. Past or present armed conflicts, political instability or economic crisis can influence international perceptions for many years. At the same time, this has to be accompanied by positive reforms by local governments, free investment and tourism zones, and promotional information programs for foreign investors.

Here are the key takeaways about Ukraine:

Due to the ongoing economic crisis and current geopolitical risks, it is especially important for the Ukrainian Government to continue its progressive reforms, which were happening in 2015-2016. Securing rule of law, an effective court system and the protection of right of property and the easing of strict currency controls are crucial to convince foreign investors to reevaluate the country.

The Ukrainian Government has adopted number of important reforms related to reformation of the tax and judicial system, simplification of registration of property and companies, obtaining migration documents (including the establishment of the modern state services center “GOTOVO”). In addition, as of May 2016, the National Bank of Ukraine has started to ease anti-crisis currency control measures. As a result, Ukraine continues to improve its position under the Doing Business rating (in 2016 Ukraine is ranked #81), and there is increased interest from foreign investors.

2016 was a year of gradual recovery

In general, 2016 was a year of gradual recovery for Ukraine, and after three years of decline, Ukraine reached a positive 1% GDP.

Efforts are being made to promote tourism

The speakers compared tourist inflow in their countries and its influence on the investment climate. Under the latest statistics, about 1-1.5 million tourists visit Kiev every year, which is higher than neighboring Belarus (300,000 tourists annually), but significantly less than 8.7-times smaller neighboring Georgia, which hosted around 6 million tourists in 2016.

Aleksei Reznikov of the Kiev City State Administration revealed details of the preparations for the Eurovision song contest, which will be held in Kiev in May 2017. In addition, Kiev in the next years will host the 2017 International Ice Hockey Tournament IIHF World Championship Division I (Group A) and the 2018 Champions League Final. These upcoming events should have a positive impact on tourism, hospitality and investment sectors in Ukraine, including real estate. However, more effort is required both at the government as well as private sector levels to turn Ukraine into a major tourism destination.

Armed conflict in the East, lack of state financing for tourism development, and expensive credit resources in the country often give investors pause. Kiev still lacks enough budget accommodation for tourists (such as three-star hotels and hostels) as well as modern equipment and concert halls, necessary for hosting cultural events in the city.

Vitaly Boyko, the CEO of NAI Ukraine, said that in 2016, foreign investors started to re-assess the country risks in Ukraine, and many of them consider the risk level acceptable. According to him, Ukraine can offer much higher profitability from investment in the development projects than in the Western Europe.

In general, representatives from Ukraine reported on increased market activity in recent months, expressed positive expectations for the coming year and had plans to expand their business in Ukraine. However, Ukraine still faces many challenges in improving its investment climate, and foreign investors still are very cautious about bringing their money or buying property in Ukraine. Therefore, only with strong political will and predictable state policy can Ukraine raise the amount of investment inflow into the country.